Last night I decided to do a night hike again. It had been far too long since I’d done one and thought why the hell not? By midday the first of the group starting dropping out – boozy lunches. Within the last 30 minutes two more people dropped out! So it ended up just being myself and Sébastien Rohner to be doing this mission.

Initially things were looking bad by 15:30 with light rain and full clouds covering the mountain. By 16:00 it was bluebird skies so we simply had to go. We took our time, starting at 18:00 and heading up Diagonal enjoying the views. I blew the first photo badly taking a 10 minute exposure. Even the second at another location I bombed in with 5 minutes. Usually I am pretty good at long 30 minute type exposures, but I’m not used to having to deal with city lights. So one learns!

Blew it – around 10 minutes exposure. Waiting a further 10 minutes for the in camera noise reduction processing and munching on a peanut butter roll while trying not to freeze in the slight wind at around 5 degrees. 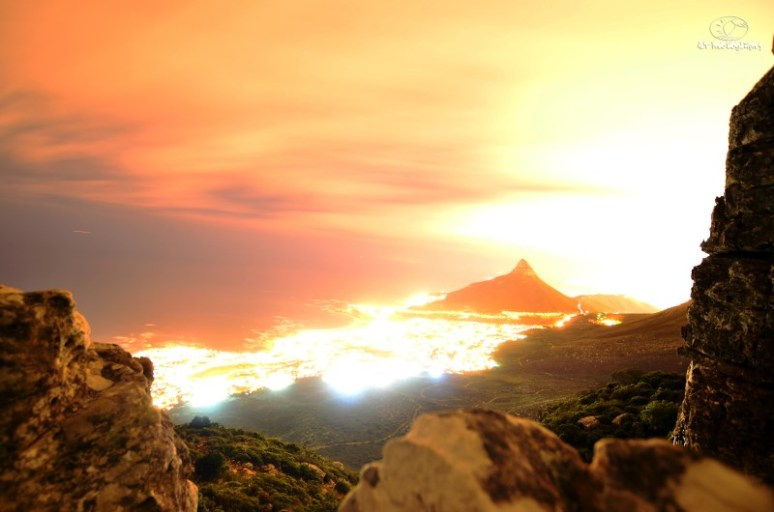 Blew it again with a 5 minute. It was rather cold so we took a few more then called it a night.

The typical route of up Diagonal and down Kasteelspoort. A very quick and easy hike with good views and satisfaction assured. For more bang for your buck, rather finish Diagonal by continuing straight up Porcupine Ravine. You top out 100 metres higher and have fantastic views. I opted not to do this route as the temperatures were about 5 degrees as this was a hike and not a run, I didn’t feel like having wet shoes from the small swamp at the end. If one runs then water is no problem – just go straight. No point taking the Gore-Tex boots either for a simple mission like this.