I had been home for exactly 9 days since my Drakensberg hike, and already I was packing to leave midday on Monday 23 May for yet another hike. It just seemed that I had not had enough, that I just needed one more hike before I settled into work again. Well truth be told, more like fill in a gap before yet another holiday but more on that in another article.

I had never been to the Groot Winterhoek Wilderness area, but my friend Brad Pienaar had been there multiple times and was rearing to go and show me this slice of paradise. As he had a few days off of work it seemed ideal that we hit a week day hike with a good chance of having not a soul around. The area is managed by CapeNature and comprises 30 608 hectares with a high point of 2077m. Sure, not nearly as impressive sounding as the Drakensberg but very special and different in its own way.

We left shortly after midday and took a relaxed ride down past Porterville and up Dasklip Pass. I reminisced on my three or four flights I did here back when I did paraglide – good and also very scary times too. As we crested the pass we took the left turn down to Beaverlac. We had taken Brad’s car as he has a 4×4 Nissan Navara with what I think is a 140 kW motor with 450 N.m. of torque and a far better choice than my front wheel drive Nissan X-Trail even though it is also a turbo diesel. I think in wet conditions a front wheel drive may suffer getting out from Beaverlac. To be honest you may not even get out. I was disappointed with Beaverlac. Everyone had spoken so highly of it and how beautiful and peaceful it was. Sure we were the only ones there, but beautiful, kind of. It is not one of the prettiest camp sites I’ve seen. I guess if you walk around the area and explore it is surely a good base point for long day hikes and fishing excursions. 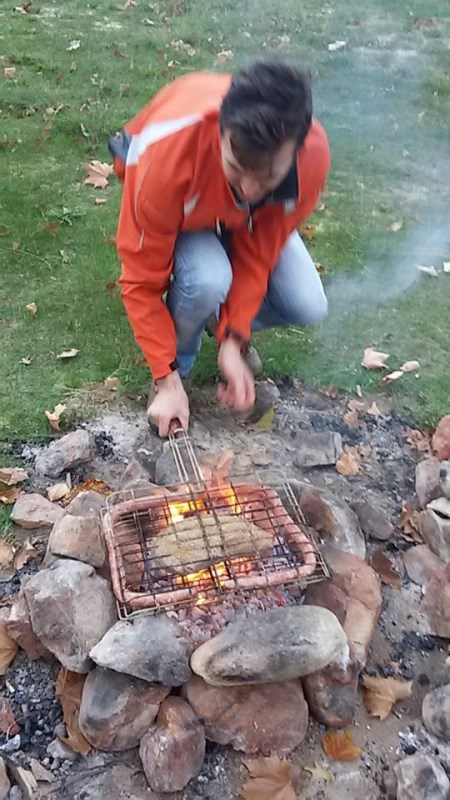 Brad trying to finish the meat before the rain came down.

That afternoon we started the fire early. We knew a cold front was coming and come it did. Brad finished the super thick rump steak in the rain and eventually we resorted to sipping some single malt whisky outside the bathrooms while watching the rain pour down.

The next morning arrived fresh and overcast. We got going and drove the short distance (around 18km I think) to the parking lot where you leave your vehicle. Rates were about R160 each to camp out for one night in the bush. There are campers huts to book and stay in too, but we didn’t take that option. After filling in the register we started the mission at 951 metres above sea level. 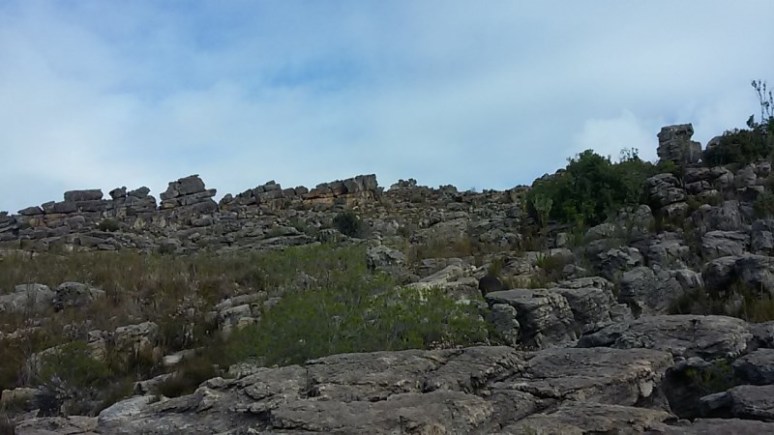 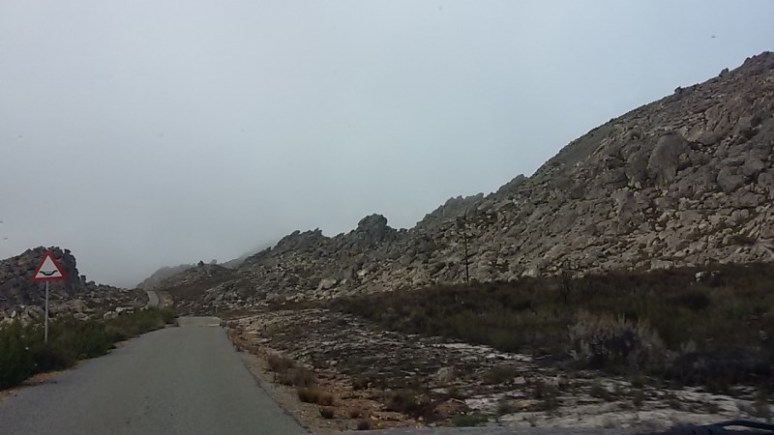 Two klipspringer on the road in. There were actually three here. 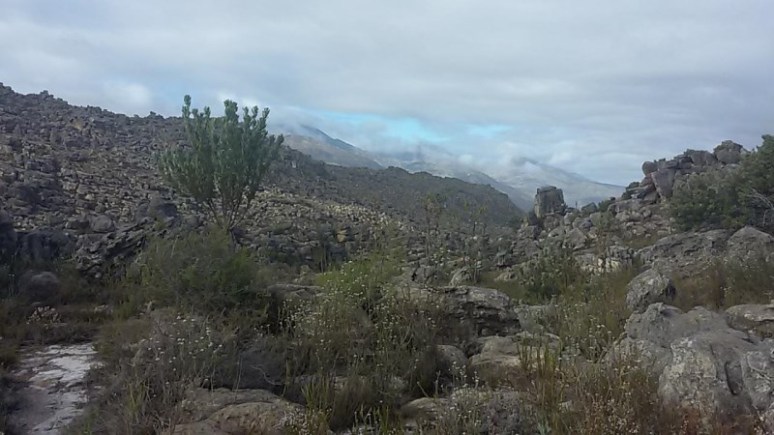 Early on in the hike.

Lovely just to be out here!

The first kilometer is on the jeep track and then it branches off to the left, dropping in altitude quite quickly for about ten or fifteen minutes before it starts the meander down to the river. It is a truly beautiful and almost moon-like landscape. I bet most South African hikers would never have seen such a rocky environment. There are even rockier places further east. The path runs near to the river and the water is that typical yellow water you get from the vegetation in the Cape. It is safe to drink, I just take my usual precautions with the water purification tablets you get at Cape Union Mart as my stomach is rather sensitive.

The path is in an excellent condition.

This would be a good path for a trail run.

Brad at the spot we stopped at for lunch.

Probably the only place it isn’t very rocky. 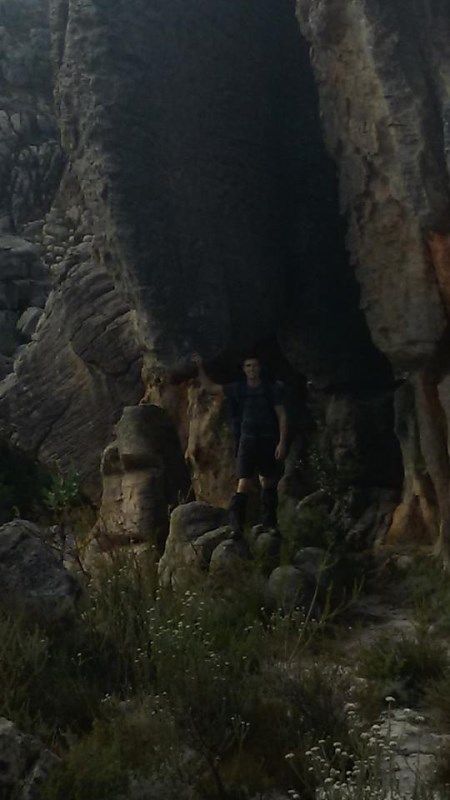 Brad in the shadows.

The river which runs in a southerly direction.

At an altitude of 640 m you reach the point where the jeep track crosses the river. In winter this can be a problem. We hiked through, both of us having Gore-Tex La Sportiva boots so it was a dry walk, but it came right up to just below our ankles. Any higher and we would have had to have removed our boots. After this you reach the huts at Die Tronk. There are four different hiker huts to choose from. They’re locked and you need to book in advance. They could be a good option for families or those with more demanding company. Another thing, they’re also well spaced away from each other which is great.

We hiked past and onwards to Die Hel. There were so many fresh leopard tracks I could not believe it. Even before the huts we had seen a few. It’s fantastic to see the tracks of these beautiful animals. About two and a half kilometres later the path gets really steep. Exercise extreme caution here as it drops down towards the river. The river lies inside a beautiful gorge that almost takes you by surprise. There is a huge pool below an inviting waterfall and I believe one of the biggest rock pools in the Western Cape. We decided to have an early supper here for the convenience of having the river right there. For starters I had the German sausages from Woolworths – delicious! Then for mains a rather boring but tasty two-minute noodles with a tin of tuna thrown in. Brad decided to also make a pasta and I watched him carefully.
“That pasta is coming my way, I can see it coming” I noted with humour as his pot teetered on the stove. 10 seconds later it fell over, pasta strewn everywhere! I felt a bit bad for perhaps jinxing it no matter, he had plenty of pasta in reserve.

Brad at the part where the path starts dropping down very steeply.

There is some jeep track around the hut area.

Looking down at Die Hel. Not really like hell, is it?

The waterfall at Die Hel.

Heading in before Die Tronk.

There are two huge oak trees as you walk off from De Tronk and walk to Die Hel.

The river crossing before the huts. I do apologise some of these photos are not in sequence!

Another (different) river shortly before the hiker huts. 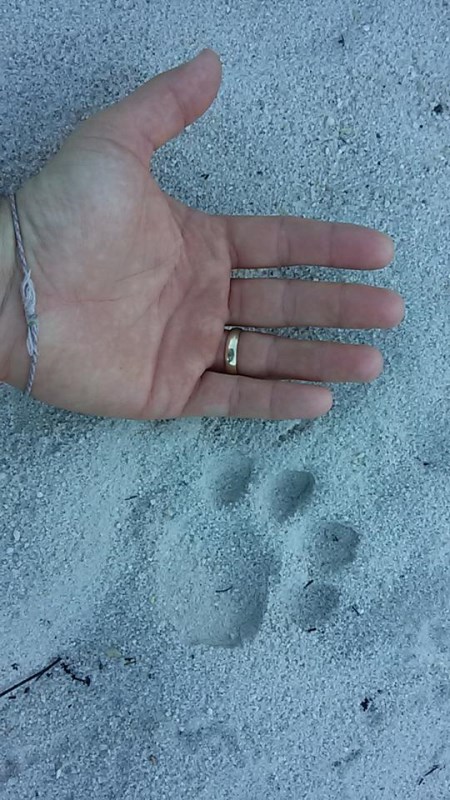 My hand in comparison to a leopard track. 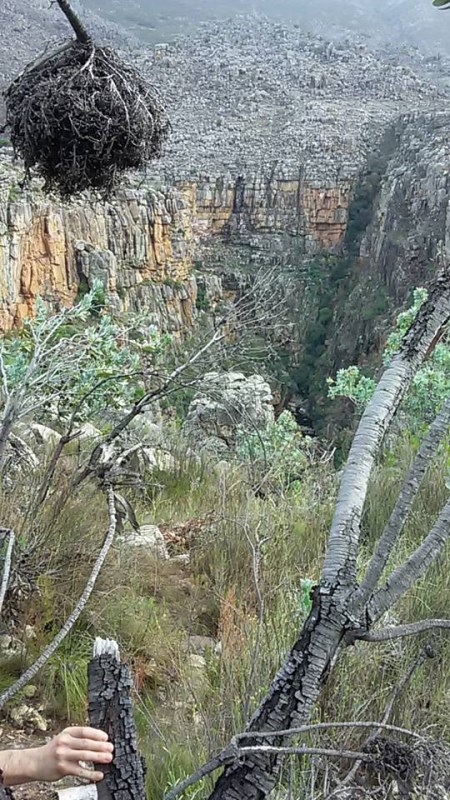 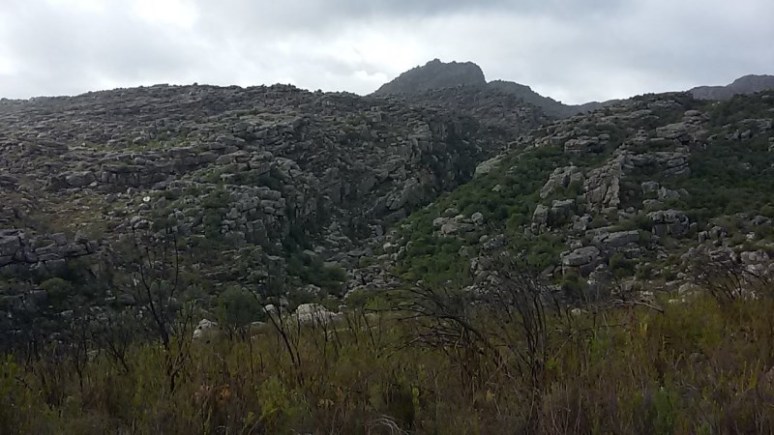 Another river near to the huts.

After dinner we hiked back up to the cave. Brad said that we didn’t need to take a tent and could overnight there. I must mention: we both did not know that you’re not allowed to overnight in the overhang. We only read that in the brochure afterwards when it was too late! There was a handy patch where someone had laid down a bed of straw, right beneath some ancient rock art. There was also evidence of people burning candles in the cave/overhang, and also firewood nearby. Out of respect for the paintings we made no fires and of course did not touch them. I felt guilty later for staying there but what an experience. 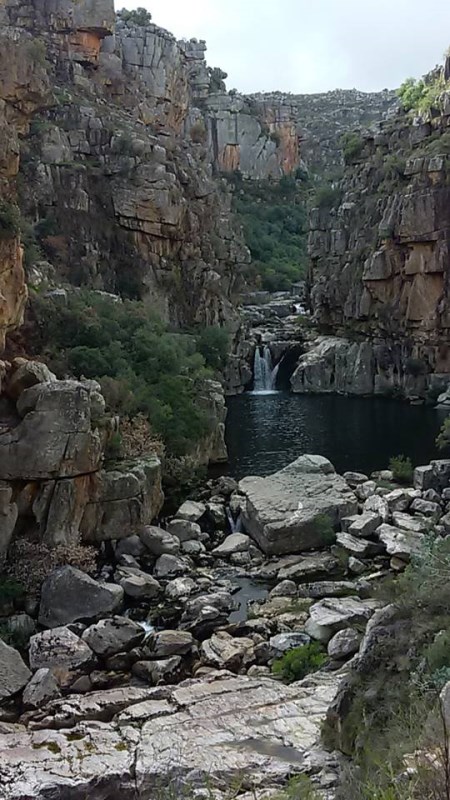 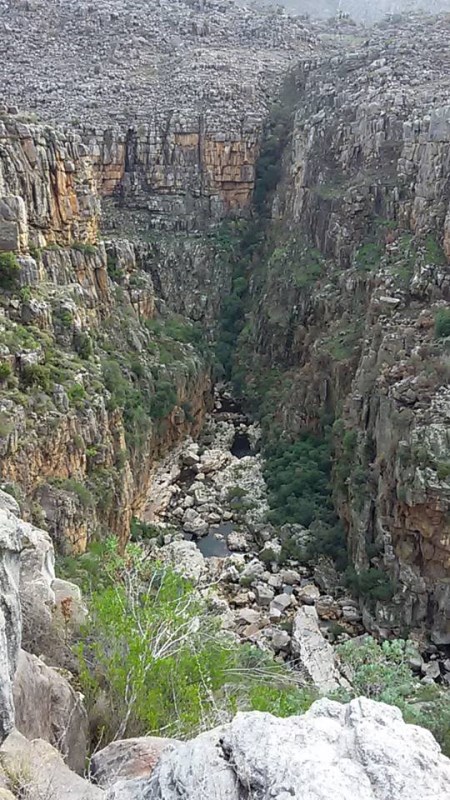 From near the overhang.

Brad before the pasta accident. 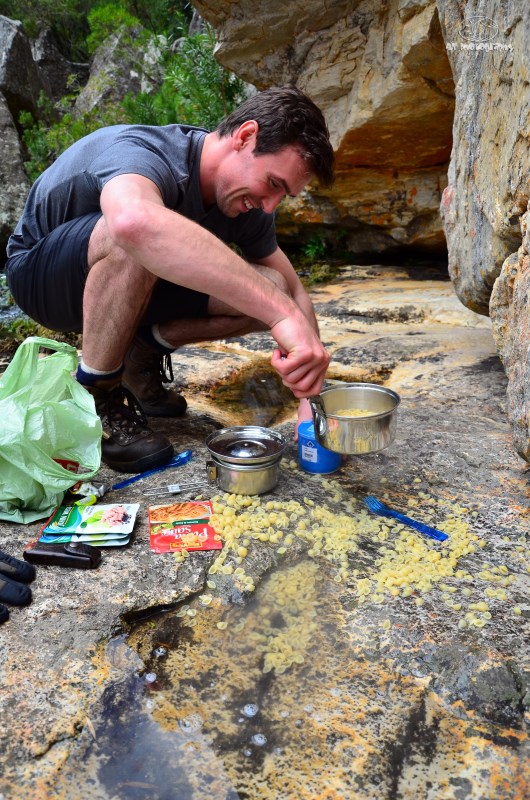 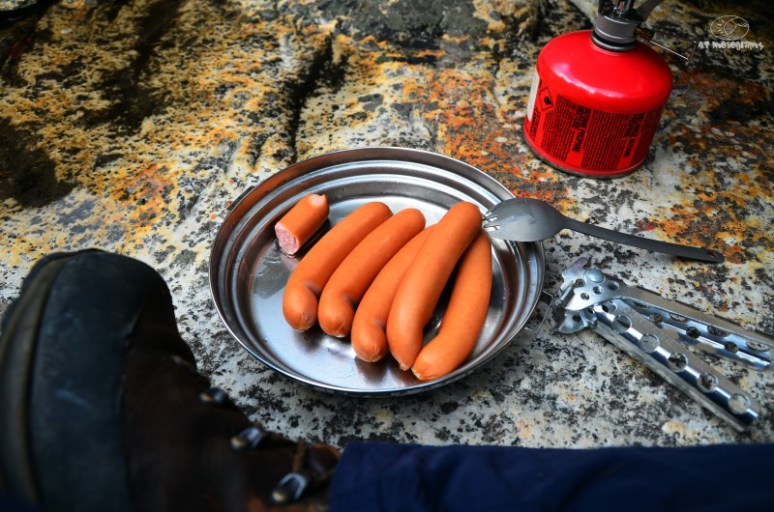 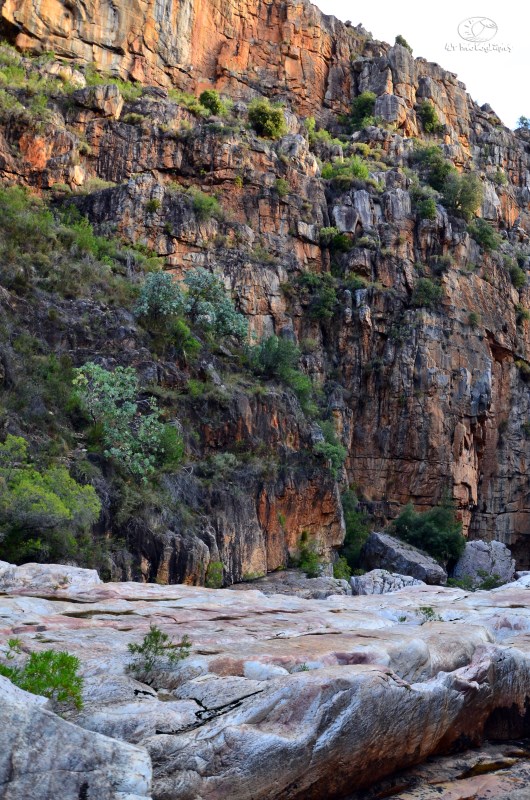 Late afternoon in the gorge.

This place must be magic in summer.

I would imagine this river to be very fun in flood for kayaking. Maybe something to consider one day. 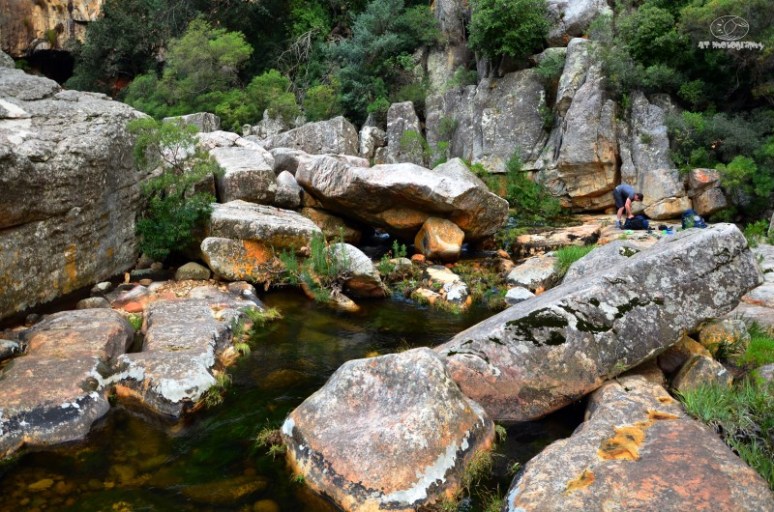 Brad on the right finishing off dinner. 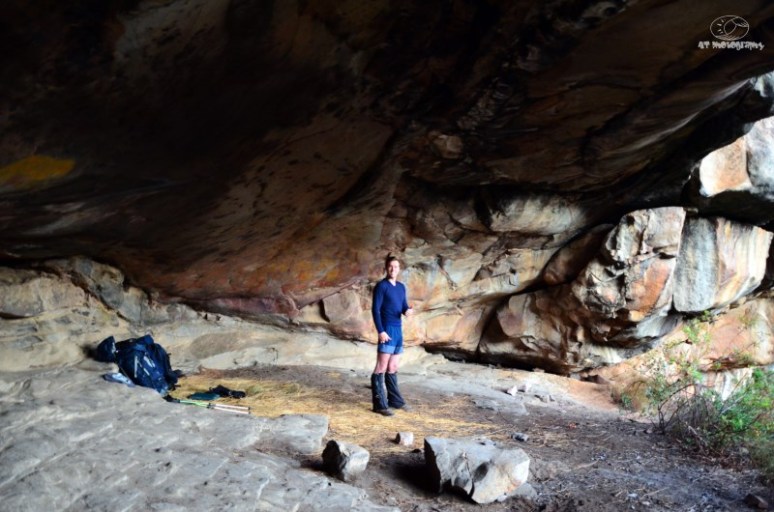 The overhang. Which you are NOT allowed to overnight in. We only found out afterwards. 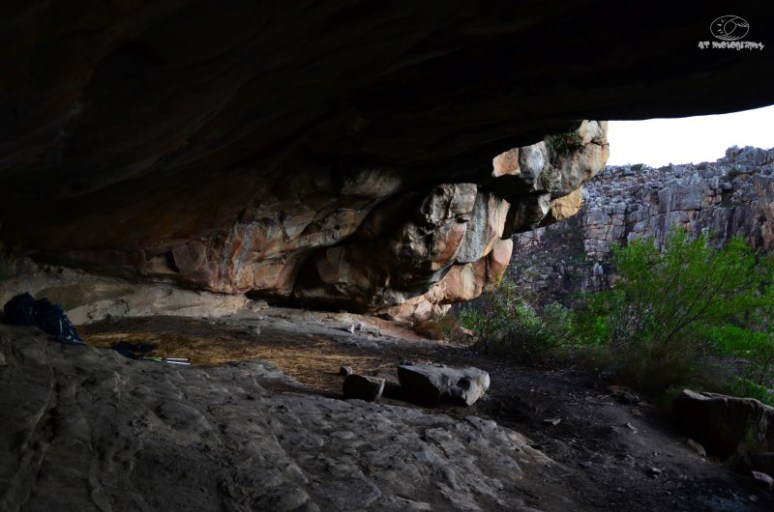 An ideal spot to stay.

As night came, so did the bats. At first a few, then many. Brad whistled loudly, and my loud I mean your ears will ring, and the bats stopped for about ten minutes. But then they obviously returned. It was quite funny as they zipped just a few centimetres above our heads! Luckily they eventually made their way out into the night and we settled down for a night of interrupted but half decent sleep. I kept waking every time I turned I’m not sure why.

Star trail shot from the overhang.

Next morning from the overhang. 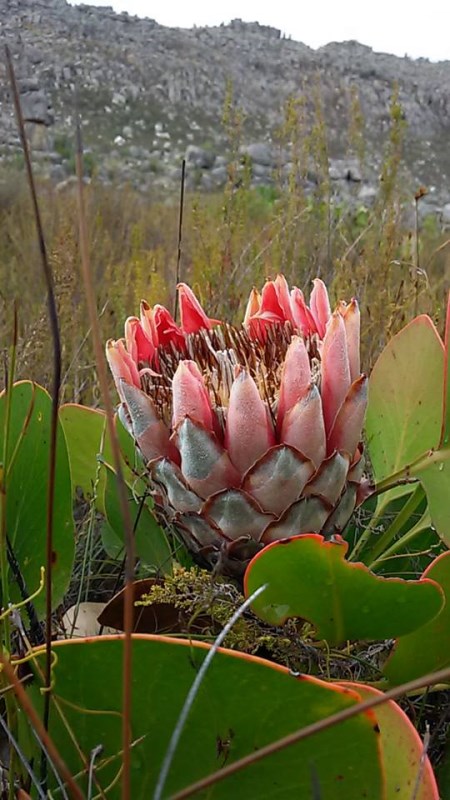 Serious rubbish thrown into an ancient bathroom near one of the huts. Terrible!

Hind tracks of a chacma baboon.

Looking out from an emergency shelter which is available.

Scenery at the huts. 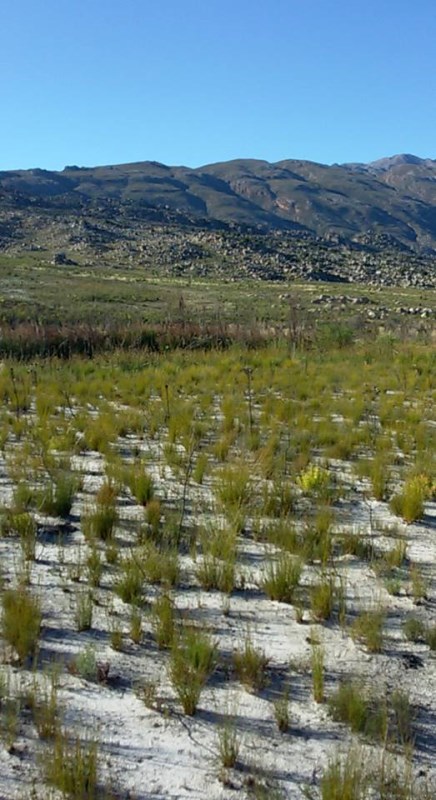 Just before Dasklip Pass. A world top 100 spot for paragliding.

The next morning it was calm and clear, and not nearly as cold as the previous day. We only noticed the cold when we left the safety of the cave. It makes you realise that there was some wisdom in early man living in caves. The grass was wet in places, but this time the gaiters were effectively used! The hike back was non-eventful and there isn’t much to really say about it. I think I’ll hike a different loop as there is that option for a northerly loop. Out and returns are often a bit of a letdown for me. Still, it was a good hike. Each way is 15,3 km. Going in you descend 700 metres and ascend 244. On the way back it’s obviously the reverse. You don’t need to be particularly fit. Not stopping my stop watch for lunch breaks, photos and idle time it took 5,5 hours to get to Die Hel, and 4 hours 45 minutes to hike back as we stopped less. We didn’t push it and my average heart rate was 106 on the return which obviously is generally uphill. I did feel tired from the hike the week before though. I surely needed a bit more rest I guess. I recommend this hike to anyone looking for something relatively straight forward and still beautiful.

Route in. Porterville is the town on the top left of the picture. Once you’re there, you see no sign of human existence, bar the hikers huts.