Last year I successfully completed my paragliding license and yes, I’m super stoked. In fact when I sit down and think back to the last few months of my life a wry smile creeps onto my face and I can kick back my feet with a feeling of deep satisfaction over the events that have transpired. Not only because I am flying but just because life is bloody good in general of late. It has not been without effort though, but the missions have been very worthwhile. The only irritating thing has been the serious lack of big, hollow waves. But hey, you can’t have it all.

There is so much to mention of what happened, where I flew, how it was, that to put everything into one article will potentially be boring for you to read, or I’ll simply never get the time to put it onto “paper” at all. But before I reminisce I must just say thank you to Barry Pedersen and Tom Webb for their unabated enthusiasm and guidance in making us skilled, safe pilots. I’m still very glad to have done my paragliding license through Birdmen Paragliding and because of the variety of sites we have flown that are both inland and coastal, soaring and thermic, we as beginner pilots have a nicely rounded training which makes one realise two things. One is that it is better to train in winter when conditions are mild and you don’t get those hectic thermals which can really rip you around and potentially frighten you – this is why Birdmen only trains in winter. And two, there is a crap load more to learn about the art of flight, and cross country… If I were to train all over again, it would definitely be through Birdmen Paragliding again. Professional, friendly and Barry has the ability to inspire confidence into many different types of people. Great learning experience. 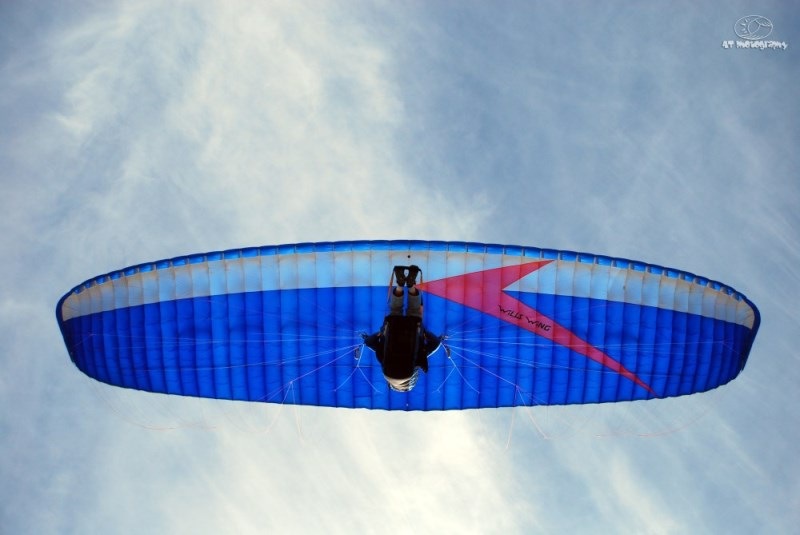 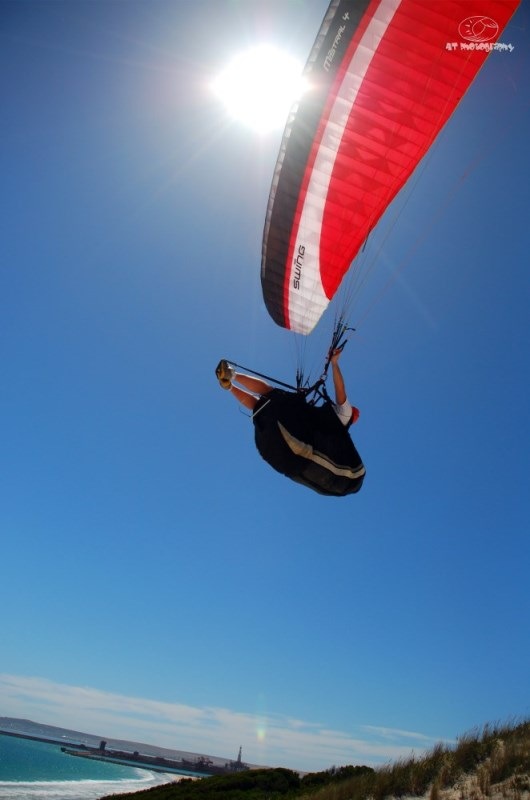 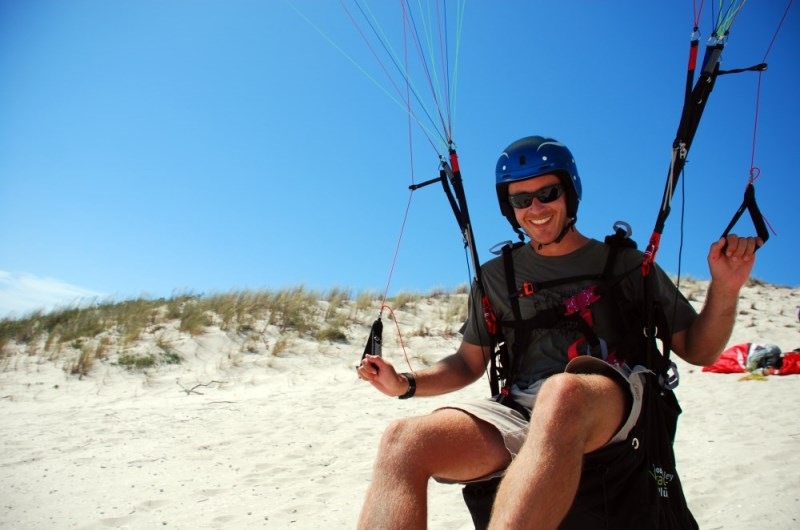 A slow landing on the slopes. 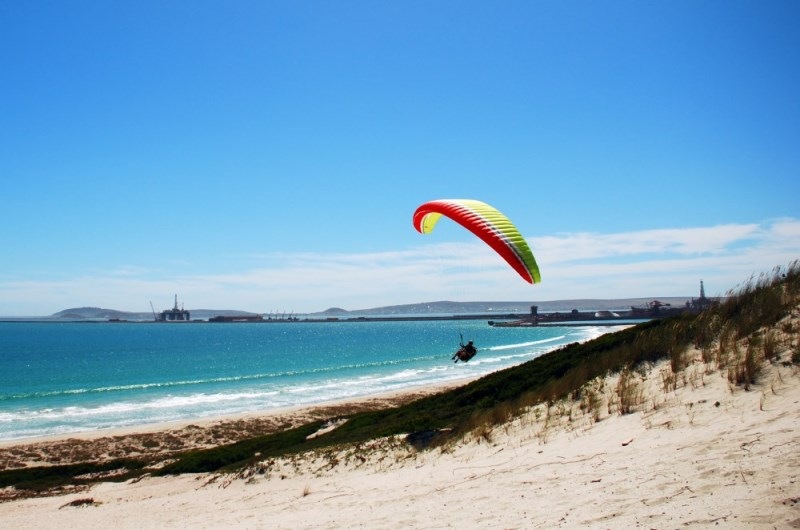 Me cruising north of Langebaan. 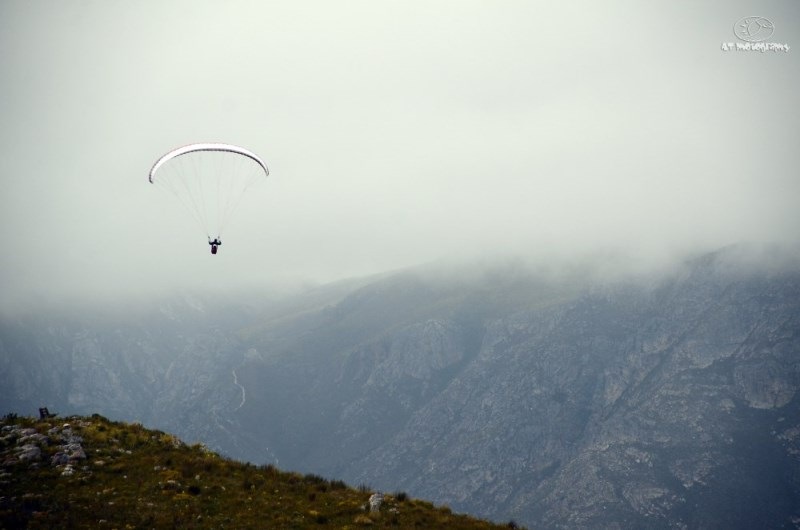 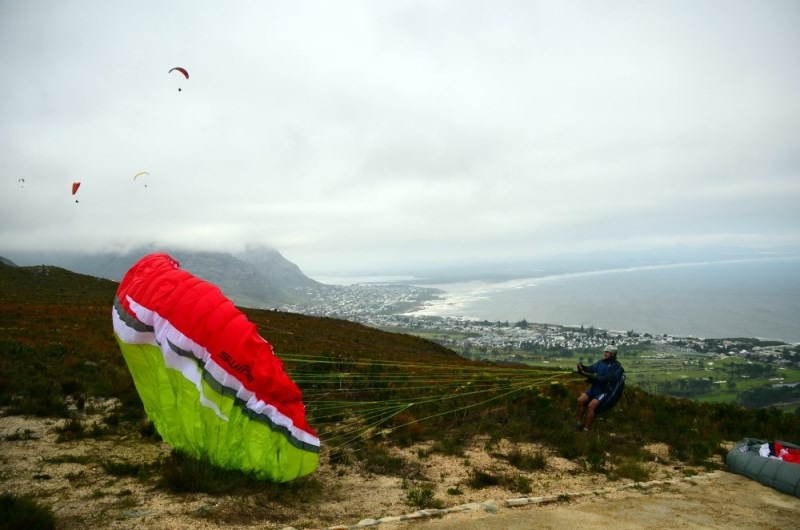 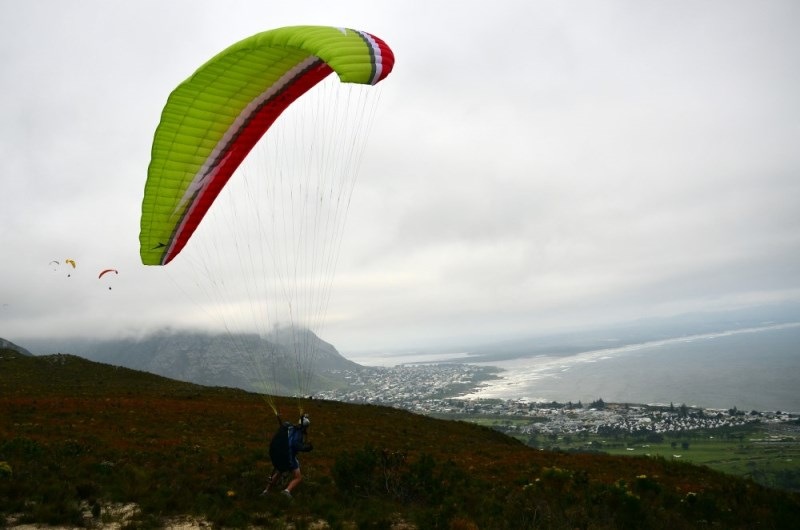 Me launching at Hermanus on a busy day – the ramp was full. Photos by Graeme Wiley. 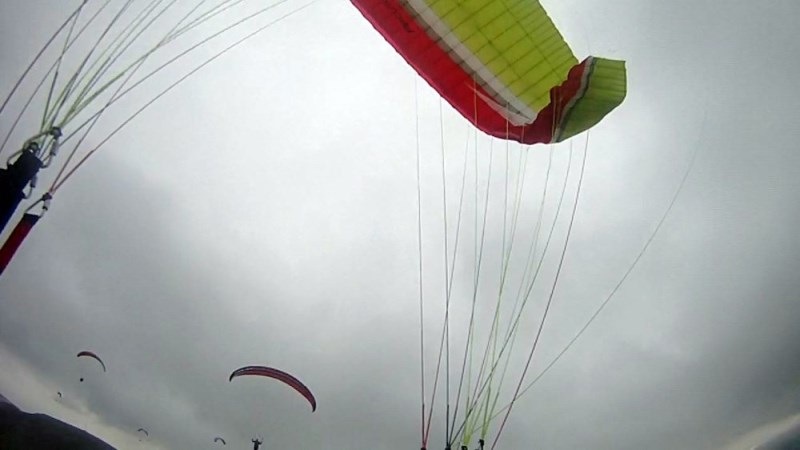 Big ears. Nothing to be afraid of.

Memories include flying on a Sunday with a huge hangover after the Gatskop event in Porterville and getting an asymmetric wing collapse on the right which I (in hindsight….) reacted incorrectly to and threw me into a small spin. Needless to say I crapped myself and for the next 30 or 40 minutes I was shaking like a leaf. Still I soldiered on and managed to fly for about 12,5 km if memory serves me. It was still a good flight and thermalling up was really incredible.

Another fine memory was flying at Hermanus and thermalling nicely when suddenly Barry came straight towards me. He jerked hard to his right to avoid me (he was in the wrong  ) and I had hit hard right and fast. The wing collapsed and opened, then collapsed again and opened with a huge bang which everyone heard on the ground. Needless to say I was a little shaken up but not so bad. I had learnt my lesson of flying with hangovers! And also one learns what can happen when you input into the wing, well, suddenly!

These memories are obviously only the scarier ones, and paragliding really isn’t that scary most of the time. Summer and powerful thermals can be but one flies within one’s limits and in the beginning it is important to take it easy. After qualifying is indeed the most dangerous time for a pilot because bravery far outweighs skill. I have been taking it easy though I think. I’m all for pushing personal limits and doing dangerous things, and have done so much of my life, but first I need more experience in paragliding so reactions come natural and without conscience effort. If I had paddled serious rivers from day one of my kayaking I would definitely have drowned a long time ago. So with flying I tend to err on the side of caution and that approach has always worked for me in everything I’ve done – more or less. 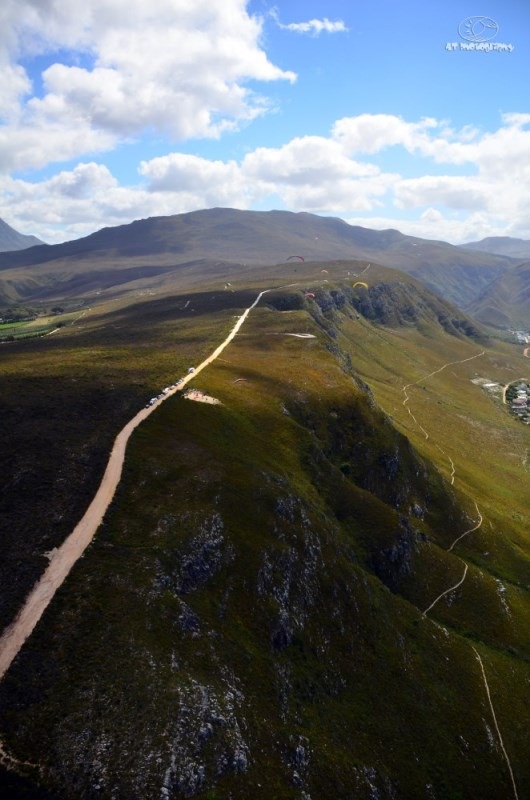 Chris above me. Hermanus.

Road side beauty at Hermanus.

Big ears on the dunes. 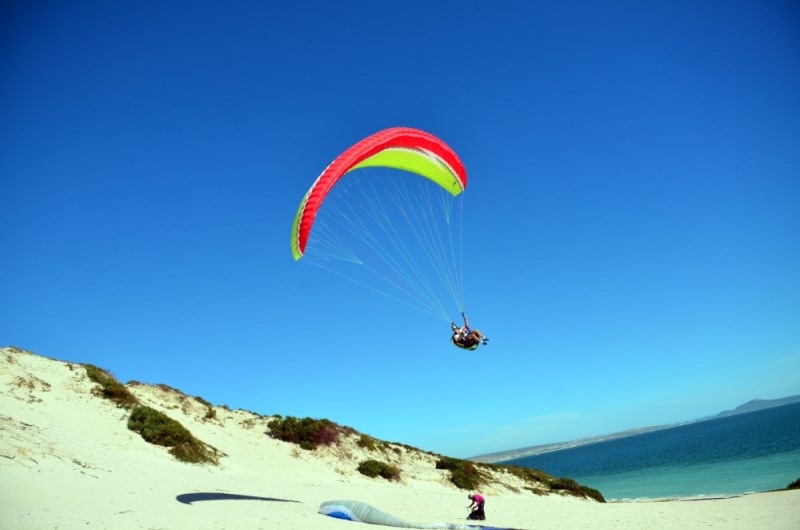 Flying the dunes north of Langebaan. 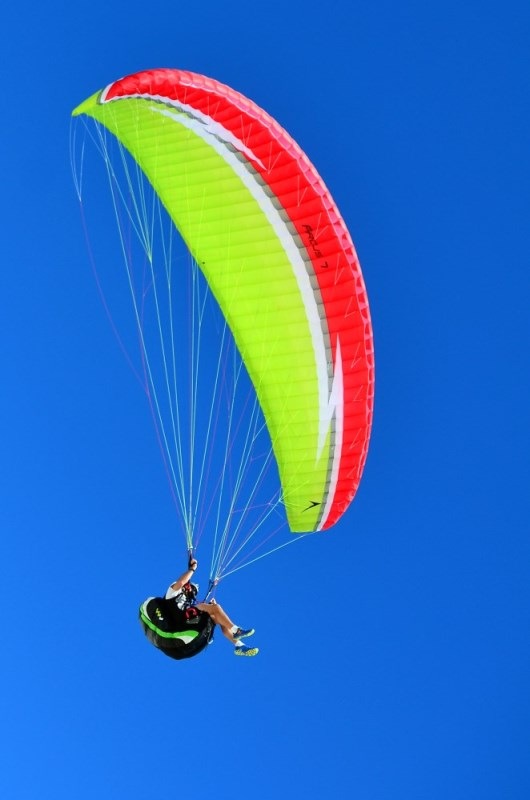 I’ve not been flying much the last two months. Been windsurfing as much as possible and being in the water all the time because of my ear operation – surfers ear. I’ll be landed based for a while now so will be back in the air as soon as I can put a helmet on again. Looking forward to flying this year with all the awesome people I’ve met so far! Roll on the good times. 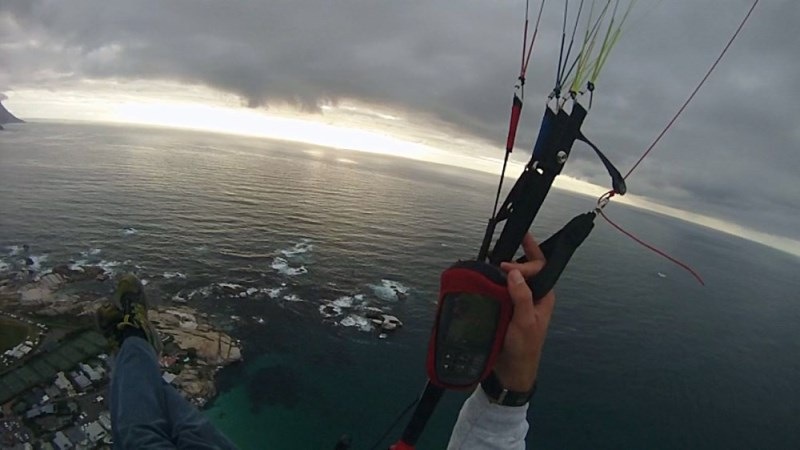 Coming in to land after my second Lion’s Head flight. 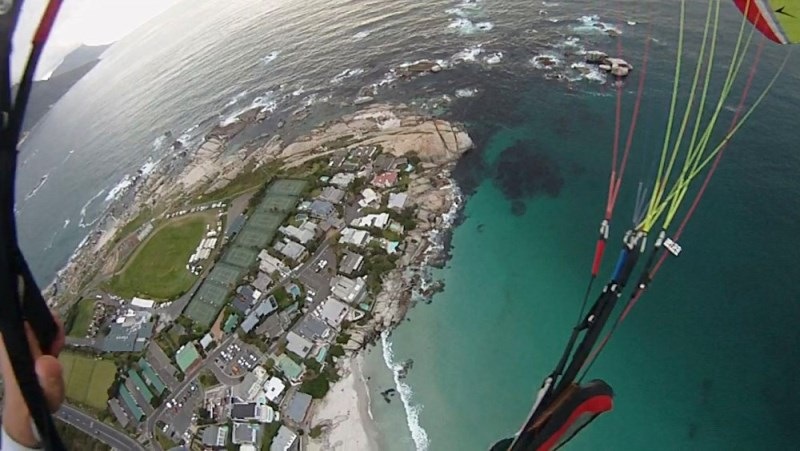 Above Cliffton after Lion’s Head. 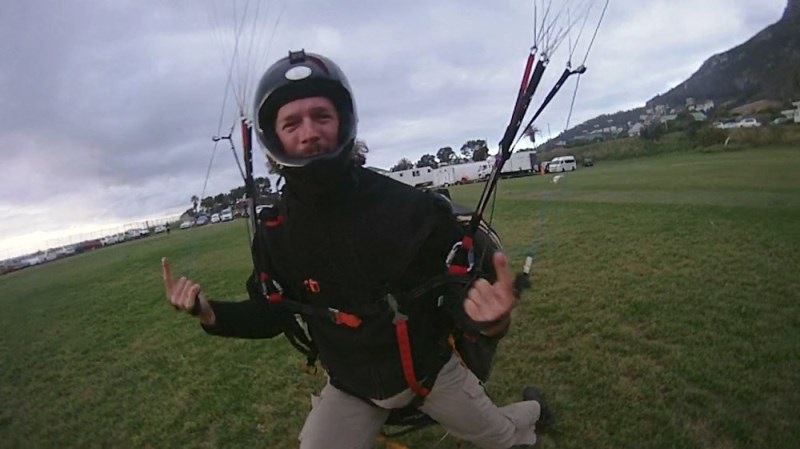 Kleinkrantz. Gavin Lay ahead of me.

First flight with my new Swing Arcus 7 wing which was quite some time ago.